Home » Pele: When India fell in and out of love with the ‘wizard of football’ 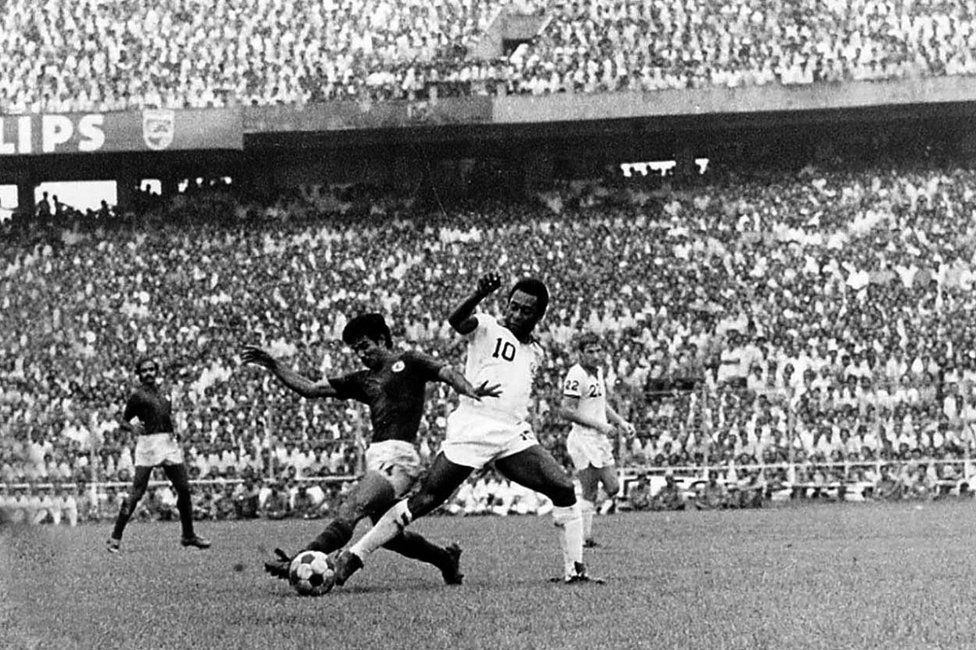 Do you like to be addressed as Your Excellency, Mr Pele? a reporter in the eastern Indian city of Kolkata (then Calcutta) asked the football legend during his three-day-trip to play an exhibition game with his star-studded team New York Cosmos 45 years ago.

The Brazilian star, then 37, gave a “disarming smile and burst into laughter,” reported The Hindustan Standard newspaper, a day before the game on 24 September, 1977 against Mohun Bagan, a storied local team and one of the oldest football clubs in Asia.

India’s football-crazy city was agog with excitement over Pele’s first game in India at the iconic Eden Gardens stadium, which then accommodated more than 60,000 spectators. Mohun Bagan, the papers said, had spent nearly 1.7 million rupees to get Pele and the glamorous US club to play in the city. Around 35,000 policemen would be deployed to control rowdy fans. Tickets were priced between five and 60 rupees.

The papers variously called him “King Pele” and “The Emperor”. The Hindustan Standard rhapsodized: “Without appearing to be even immodest, let alone vain and arrogant, Pele can compare himself with the other all-time greats in history like Leonardo da Vinci and Beethoven. Maybe to connoisseurs of the game, Pele’s football is as rapturously beautiful as the Mona Lisa or the Ninth Symphony”.

The build up to the game was intense. Pele – and that too in Calcutta is unbelievable, said a tea shop billboard. A local paper ran a graphics-led series on its front page explaining how Pele played his game. The star’s name featured in advertisements for health drinks. Long queues of fans to buy “lottery coupons” – tickets would be sold after a draw – snaked outside football grounds. An astrologer played spoilsport, predicting Pele would fall ill and would not be able to play the entire duration of the game.

When Pele arrived in an Air India plane from Tokyo – Cosmos Club was ending a two-week goodwill trip to Asia, with stops in Japan and China – around midnight on 22 September all hell broke loose. Mass hysteria had gripped the city.

Newspapers reported a sea of screaming fans inside and outside the airport. Cries of “Long live Pele!” rent the air. “I have never seen such a crowd at this time in the night outside the airport. Fans have come from all over the city and the suburbs,” a reporter with the Ananda Bazar Patrika, the largest-selling Bengali newspaper, wrote.

On the tarmac a wave of fans brandishing garlands broke through the security cordon and surged towards the Boeing 707 plane. Pele stepped out of the plane, his fingers in his familiar V salute, and went back inside after seeing the scrum below, according to the papers. Only after the police dispersed the crowd, the footballer stepped out with wife, Rosemeri, followed by the rest of the team, that included stars like Brazil’s World Cup-winning team member Carlos Alberto Torres and Italian player Giorgio Chinaglia. They went to the terminal building, where Pele told waiting reporters: “I am tired, will see you in the field.”

So much was the desperation to know more about Pele, reporters pounced on a Japanese co-passenger on the flight. “I thought I would get friendly with him on the flight. But the English is poor and I didn’t want to impose myself on him. Also Pele slept through the flight,” the passenger said.

The mayhem continued. Inside the airport, police baton charged fans who smashed glass panes and flung shoes for not being able to catch a glimpse of their idol. Outside, thousands of fans prowled around the car park. Occasionally a roar would go up – “Pele is leaving! Pele is leaving!” – and fans would run in all directions trying to find the vehicle that would take the team to the city, the papers said.

The police whisked Pele and Cosmos players into a bus to take them to a luxury hotel in the heart of Kolkata. Fans teemed outside, and crowded the hotel lobby. Over the next two days, according to the papers, Pele was mostly holed up in his suite with his wife, secured by his “enormous bodyguard” in the next room. He turned up at two receptions hosted by the US consulate and Mohun Bagan. “We are trapped in this fortress of love,” Rosemeri told a reporter.

Pele, of course, turned up at the Eden Gardens with his team for the weekend game, vowing to play for the entire 90 minutes, despite the wet and slushy ground and a grim weather forecast, according to local papers.

Novy Kapadia, a football writer, offered a different version in his book, Barefoot to Boots: The Many Lives of Indian Football. “Pele almost refused to play because of the slippery conditions…Police officials implored Pele, saying the crowd would get violent and lynch the Mohun Bagan officials if he did not play. The great Brazilian finally relented, but was cautious throughout the match,” he wrote.

By most accounts, the game turned out to be a bit of an anti-climax. Despite taking a few unsuccessful shots at the goal, Pele was mostly off-colour against a spirited home team on a muddy ground battered by rains earlier in the week. The game ended in a 2-2 draw. When Pele left the ground, there was a hushed silence, the papers said. In contrast, tens of thousands clapped in frenzied unison when the Mohun Bagan team left the field.

Kolkata’s manic love affair with Pele was beginning to unravel. One headline said: “It is clear that Pele has grown old”. Local football pundits were unforgiving.

“Pele was invited to Kolkata so that our young footballers could learn more about the game. At least, that’s what the organisers told us. What they actually learnt from Pele is how to spend 90 minutes on the field without doing much,” wrote Moti Nandi, a respected Bengali sports writer, in Ananda Bazar Patrika.

The hysteria over Pele now evaporated quickly. Crowds outside his hotel thinned. A deflated fan accosted a minister of the ruling Communist government and said “a fake Pele had been brought to Calcutta”. A Communist MP told the same minister: “You need to refund the ticket money for the game.”

So when Pele left for New York on a Sunday night, there were no crowds at the airport. “The King’s Depressing Departure,” headlined a newspaper story. The exuberance of fans had waned. Santosh Kumar Ghosh, a veteran journalist, said a fraction of the money spent on Pele and Cosmos could have “beautified many of the roads in the city”.

The parting shot on this “most uncompetitive match” was provided by Arijit Sen, a well-known sports commentator of the time.

“The Cosmos players did not offer more than 25% of their capacity and were content to play out the time,” he wrote.

“Their purpose had been served. Their kitty had swelled with the poor Indians’ hard-earned money”.

0 Views
In 2022, India came for Kashmir’s land, votes and journalists
“No Greater Loss Than This”: Pak PM Condoles Death Of PM Modi’s Mother